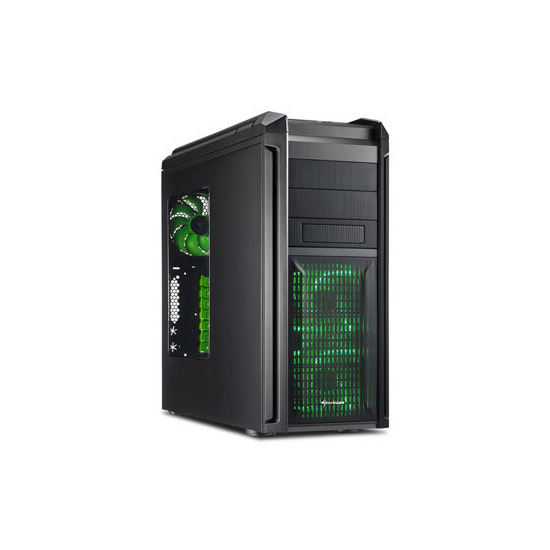 The Tauron is a massive ATX format PC case and available in multiple color variations. There are two dif... See full description.

The Tauron is a massive ATX format PC case and available in multiple color variations.
There are two different versions in black but the mainboard mount, slot faceplates, hard drives installation bays, blades from the internal fans and the latches of the quick locking mechanisms are in a different color from the rest of the case, either toxic green or fiery red.
Fittingly, the colorful elements on the inside is also coordinated with the illumination of both black versions: With the red version two 120 mm LED front fans the status LEDs are red, while in the green version these same elements are illuminated green.
In addition, a completely white version of the Tauron is available which include blue illuminating front fans. Here the internal fans are equipped with white blades.
The other key data of the individual variations are identical:
The Tauron comes with an I/O panel located on the top of the case, which is protected by a cover. The I/O panel offers two USB3.0 ports as well as two audio and two USB2.0 ports. All these ports connect directly to the mainboard.
Additionally, the Tauron’s I/O panel also has two fan controls. These two controls can regulate up to six case fans. With this, the airflow rate of the case can be quickly and easily adjusted to current conditions and individual demands.
The entire structure of the case compliments the desire for proper cooling of the internal components. Two combined 120 mm fans in the front draw in cool air from the outside. A 120 mm fan on the rear side and a larger 170 mm fan on the ceiling blow the warm air out of the case.
If that is not enough, the case also offers the option to install another 120 mm or 140 mm fan on the floor.
The power supply has an autonomous cooling cycle: Cool air is supplied through the dust filter of the air intake on the case floor and blown out directly out through the rear of the case.
In addition, air is drawn through inlets on the right side of the case which contributes to the cooling of the CPU and hard drives.
The Tauron case has three hard drives cages, two of which are modular: They can be arranged, if necessary, to install long graphic cards up to a maximum length of 42 cm.
The mounting of up to a maximum of seven 2.5" or 3.5" hard drives or Solid State Disks occurs through the decoupled installation bays.
The hard drive cages allows up to three optical drives to be installed, with the lowest 5.25" drive bay offering the possibility to install a 3.5” drive bay. The installation of the optical drives and the 3.5" drive frame occur through the pre-installed quick locking mechanisms.
The arrangement of cables on the inside occurs through our elaborate cable management system, in which the cables can be simply and cleanly stored behind the mainboard mount. This allows optimal airflow throughout the inside of the case.
In addition to the cable feed through, a large hole for CPU coolers on the mainboard mount is provided, so when changing coolers the entire mainboard does not need to be removed from the case. 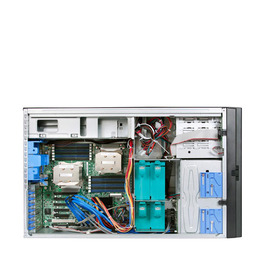 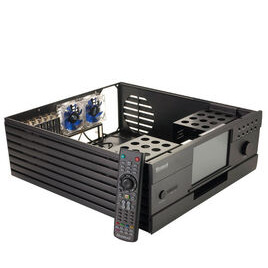 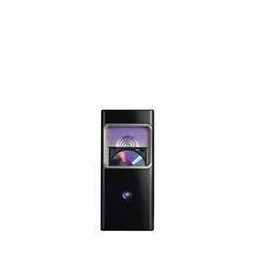