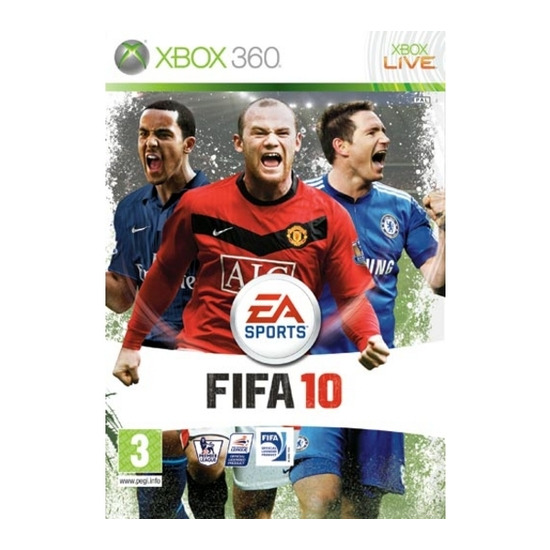 An advanced FIFA 10 features core gameplay refinements based on responsiveness and intelligence, plus a completely overhauled Manager Mode that includes more than 50 major improvements. These enhancements and more deliver a new standard for authenticity, as FIFA 10 continues to set the benchmark in both innovations and gameplay as the most complete simulation of football.

The first-ever true 360° dribbling system in a football game gives you precise control to skillfully play spaces between defenders that previously were not possible.

Wider dribble touches and new collision sharing allow for a less predictable yet extended fight for possession, resulting in more realistic battles between the dribbler and his defender.

Improved Urgency AI logic, with over 50 new movement cycles, delivers more responsive positioning so your players stay focused on the ball and move at a speed appropriate to the action.

Players now have a better awareness of where the easiest, most natural trapping position is so they can get the ball on the ground and under control easier and earlier.

Players better analyse space, resulting in pinpoint passes that give their receivers more options and time to outrun defensive pressure.

Refinements to the shooting system and tweaks to the ball physics create a wider, more realistic variety of shots that enhance the exhilaration of scoring.

Slide tackle targeting has been improved so good players have more reach and avoid tackling through the dribbler. Better effort clearance logic gives defenders more options when attempting to get a foot on the ball before an attacker. Effort, such as sliding to block crosses and overhead kick clearances, will give the defenders more tools in order to prevent goal scoring opportunities. Balanced by less forgiving standing tackles, defending is now a more tactical skill in FIFA 10.

Various improvements mean that goalkeepers now have a better perception of where to intercept loose balls and how urgently to do so, resulting in a more responsive and powerful rushing system. New animation warping technology provides game-realistic goalkeeper positioning and momentum, allowing for more variety in scoring. Refinements to the current goalkeeper behaviours, adding some new behaviours (like swatting the ball from the goal line) and general AI enhancements will improve his effectiveness across the board.

With over 250 million games played by the FIFA community, listening to the feedback and addressing gamer frustration has become a key part of the FIFA strategy. Better balance on lofted through balls; improved goalkeeper intelligence; more realistic shooting physics with less shots hitting woodwork; realistic sprinting and movement animation; refined off-side and advantage rules; and a more immersive football experience through continuous play and quick free kicks are just a few of the issues raised and addressed in FIFA10.

With over 50 improvements, FIFA 10’s new Manager Mode is as close as you can get to running a team without actually being named to the job.

Calculated minute-by-minute, Manager Mode lets you make decisions based on your team’s strengths and weaknesses including player performance, strengths of lines and strategic formations.

Truly realistic transfers are made using logic based on multiple decision factors including finance, prestige, career prospects, other players’ involvement and competition from AI clubs.

Just like on an actual team, the growth curve of your star players is based on multiple factors such as their playing environment and the demands placed on them.

Manager Mode takes you deep inside the world of football with formations and squads determined by match importance, real-time week-by-week transfers and transfer event summaries that promote bidding wars.