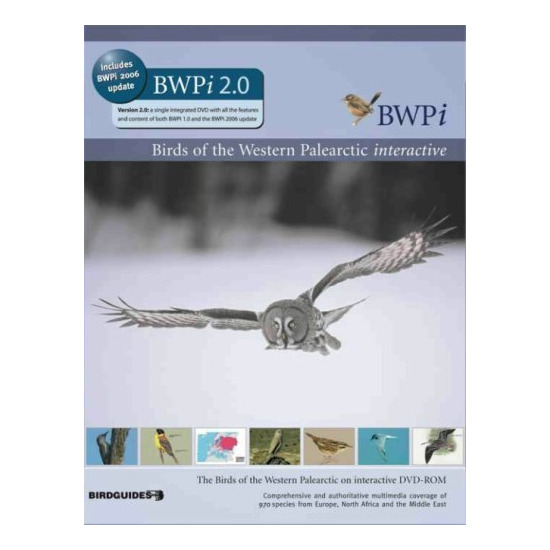 BirdGuides and Oxford University Press have combined their resources to give you one great DVD - ROM that... See full description.

BirdGuides and Oxford University Press have combined their resources to give you one great DVD-ROM that offers all of the following at the click of a mouse!

The ULTIMATE artwork
Over 5600 illustrations of over 900 species, showing birds at rest and in flight and in various plumages, accurately painted by some of the world’s best artists including Ian Lewington, Chris Rose and Alan Harris. Every illustration has been individually isolated and captioned so you can see more clearly than ever before which species and which plumage is being shown. There are also specially-created annotations to point out how to identify a bird and how to determine its age, sex or race. These can be shown or hidden as desired.

The ULTIMATE video collection
The video clips presented here are a significant upgrade on those previously available in BirdGuides DVD-ROM Guide to All the Birds of Europe. BWPi not only has more videos of more species, but the quality of reproduction has in many cases been improved by taking advantage of the latest technology. Videos represent the next-best-thing to actually seeing the bird in the wild and BWPi will allow you to ‘watch’ over 650 species. There are over 2000 clips on the DVD with a combined running time of 10 hours!

You can expand any video clip to the size of your choice, watch them again and again and view the footage frame-by-frame to study details of plumage or behaviour. Multiple videos can be played simultaneously side-by-side.

The ULTIMATE sound collection
The sound recordings gathered on BWPi provide an even more complete collection of bird sounds, covering over 580 species. There are also some extra species in which the video clip includes the sound of the bird singing or calling; this brings the total number of species with sounds to over 600.

The ULTIMATE format
Based on a completely new version of BirdGuides’ award-winning software, BWPi will enable you to view any image at any size and to compare side-by-side any selection of images or video. The new software takes full advantage of today’s high resolution displays including support for multiple monitors. It is fully cross-platform, running under Apple Macintosh OSX as well as Windows 98/ME/NT/2000/XP.

Amy Winehouse - I Told You I Was Trouble DVD Video